Nestled in the lush mountains of Honduras, near the border of Guatemala, lies the beautiful town of Copan Ruinas. Take one of the cobblestone streets up the hill not far from the city center and you will find La Casa de Cafe, a bed & breakfast run with a personal touch. Everything about La Casa de Cafe exudes a welcoming warmth, from the fresh homemade tamales to the handwritten good night note left in the room each evening.

After many hours of flights, layovers, a stunning mountainous bus ride, and a lively motor-taxi we arrived at La Casa de Cafe, whose adobe walls and verdant grounds cleared away our weariness within moments. We were greeted warmly by Fatima who, with a lilting musical voice, offered us refreshments on the patio. Piping hot chicken tamales with pickled vegetables and ice cold beers were served by candlelight as the night drew down around us. Now fully reinvigorated, we walked to Parque Central where vendors sold local goods from small stands and children ran about laughing and happy. 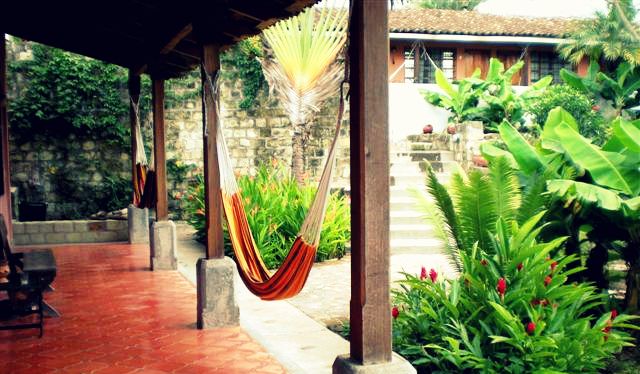 In the morning we were treated with a delicious and very generous breakfast in the gardens. Later, a short motor taxi ride from the hotel took us to the incredible ancient Mayan ruins of Copan and then back into town for delicious Honduran cuisine. After a thoroughly refreshing nap in our simple yet handsomely appointed room, we visited nearby Macaw Mountain where we got up close and personal with the gorgeous birds. As the sunny afternoon was taken over by ominous clouds, I made a reservation at the hotel to get a massage, which ended up being one of the best ideas I have ever had. The storm closed in just as I got settled into the massage bed, and rolling thunder and streaks of lightning accompanied Fatima’s expert, soothing hands.

Our last morning in Copan Ruinas was spent riding horses up to a breathtaking viewpoint followed by wandering around the town, drinking in the old world charm. Unapologetically, our afternoon was spent doing as little possible lounging around La Casa de Cafe in hammocks with a good book and perusing the historical memorabilia in the lobby.

We left very early in the morning to catch our 6am bus out of town, but Howard and Fatima still made sure we were taken care of, providing us with a full breakfast for the road.

The beach is calling your name....
Open your heart to México, and it will invite you in.
The Maya town of Zaci was dismantled in the 1540s by Spanish conquistadors and those stones were used to build what is now the city of Valladolid. Throughout the centuries, the Maya revolted numerous times and still work today to keep their customs and their language alive to share with the world.
I spent the perfect afternoon at Hacienda Ochil, just a short hop from Mérida. It used to be a sisal plantation and is now a great place to have a leisurely lunch and walk around in a beautifully preserved part of history.
Every corner of @rosasyxocolate is a dream.
Loving every color of every house while exploring Mérida. Best done by foot!
Sometimes the friends you meet while traveling are covered in fur. And that's OK. This #Montenegro boy not only had the best view, but also got fresh goat's milk every morning.
I will never ever get tired of jumping into a beautiful cenote in the Yucatan. #romp
Plants make everything better! I loved this #airbnb in the Roma Norte neighborhood of México City. Not only was the design on point with thoughtful artistic touches, but it was right above one of the coolest bakeries in town.
Loading Comments...
%d bloggers like this: